*Sigh*… another Disneyland trip in the books. This time around, my husband surprised me with a trip to Disneyland with our two boys for my 30th birthday! 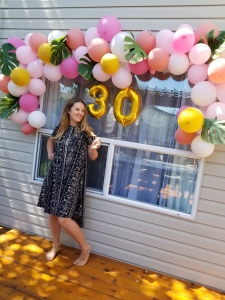 Friends and family chipped in to make it a reality. As a bonus, our vacation overlapped with one of my sisters, and we were able to spend a day in the park together.

In an effort to keep the trip affordable, we ended up booking a 5:00 AM flight out of Bellingham WA, with a 6:45 AM flight out of Seattle, getting into LA for 9:15 AM. Our amazing father got out of bed for us at 2:30 AM to get us to the airport for 3:30 AM. My mom had cold brew coffee waiting for us in the fridge, as well as breakfast that we could grab and go for the boys.

Traveling with an Infant

I had pre-checked the TSA rules for traveling with an infant, and boy was I ready. Feeding a one year old can be tricky at home, let alone when you’re on the road. So I brought about 12 food packs with me in the diaper bag. As I mentioned, TSA allows them through when travelling with an infant in reasonable amounts. I had 12, and sent about 15 with my sister who was driving. If you go this route, be prepared for extra screening. They did have to open two to test them to make sure they were okay, and they swabbed them. Funny story, the swab came up positive for chemicals known to be used to make explosives on four out of the 12. For some reason they zeroed in on my husband, and did a thorough sweep of all his possessions, as well as a good ol’ pat down. Again, I knew we were within our rights, so we accommodated every request, and were on our way about 20 min after starting security.

I’m not gonna lie, I was nervous about the flight time before we left. But it ended up being absolutely perfect. We were all up at 2:30 AM, but I made sure we had a lot to eat. The boys didn’t fall asleep on our way to the airport, but our one year old fell asleep after a little bit of play time on the floor. Our three year old was so jazzed that he was super content for the flight, and only napped for about fifteen minutes on the plane… and then napped on our way to the hotel!

We had a great first day, since we got into LA at 9:15 AM, and were at our hotel  by 11:00 AM. We had checked the boys car seats, and booked a Super Shuttle Ride Share. Once they arrived it was only a forty minute drive to our hotel. But the shuttle did take a loooong time to arrive. That night we walked to Wal-Mart across the I5 overpass for some fresh fruit, sunscreen (we’d only brought carry-on luggage… I know, I know, we’re rock stars… we even managed to get a kettle and french press in there!). Because the boys were tired, getting to bed that night was a breeze. Rather than be super hyper about being at the hotel, they went straight to sleep.

Let me tell you, my husband KILLED it this vacay with the food picks. First day, Sabrosada. Authentic, cheap Mexican. Need I say more? There is a Subway a couple doors down, and it is within walking distance if you are staying within ten minutes of the parks. We had the Carne Asada fries and a California Burrito for a grand total of $16. We had enough food to feed another family!

The next day we rented a car and headed to the beach! Newport Beach is our favorite. It is close to the Disneyland resort (only about a fifteen minute drive), and has a cute feel to it. The only thing to be aware of is to check where the bathrooms are before you go so that you don’t end up with a fifteen minute walk to the bathrooms. There are bathrooms at the main pier, and then past the second pier before the elementary school. On our way back from the beach, we stopped at the Crack Shack. Oh baby. This place had a really cool vibe, and an amazing Chicken menu. The sauces were also really fun. 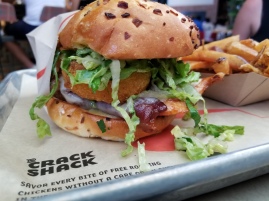 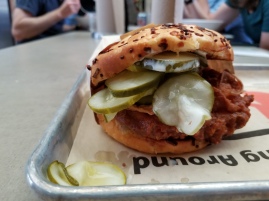 On our last day, we checked out The Pizza Press. Think Mod Pizza… and within walking distance of Disneyland! $9 got us a customized pizza that fed our entire little family of four. And I’m not talking “technically enough food to survive and function”. I mean walking away completely satisfied with what just transpired.

Doing Disney with a One & Three Year Old 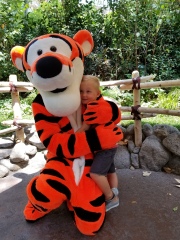 Our first and last day in Disneyland (minus a quick meet up with my Cali cousin for a couple hours on our last day) were by ourselves. It was really nice to be able to concentrate on just our family. However, the down side is that unless you want to separate while one person rides and the other watches the kids, you are limited to what the kids can ride. Luckily, there are lots of rides and activities. But for someone who loooooooves big rides, a part of me died a little each time we passed Guardians of the Galaxy. It was so fun seeing our kid’s excitement as they met different characters, and experienced the different rides. Snacks made a big difference, especially if we were traveling from one attraction to another. (Check out this blog for what we recommend to bring to the parks.) 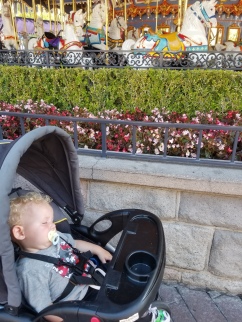 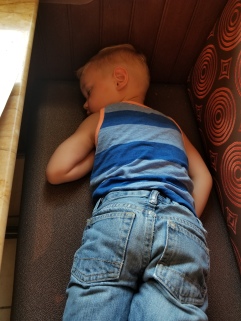 One of the things I’ve noticed that parents stress about is nap time. But let me let you in on a little secret. They will nap when they’re tired. Whether you put them in a carrier (I was able to go on every ride the boys were allowed on with my youngest in the carrier) or pop them in to the stroller while you’re walking from ride to ride, they will pass out eventually. Granted, it won’t be at the usual time, or the usual length, but they make it up. Our one year old did three or four thirty minute naps, rather than his two one hour long naps. On our day off we tried to keep him to a more regular nap schedule, but even then we were wanting to be out and about, so he would fall asleep in the car for twenty minutes, or on our way to Downtown Disney in the stroller. He slipped right back in to his regular routine once we were home.

Now, now, obviously we followed those rules. The rules we did not follow, however, were our own! Cue eye roll here. As I mentioned, our trip happened to overlap with Heidi’s family. So our Disneyland day was slightly off kilter, because while it was our second day in the park (when we would normally START in Disney’s California Adventure), it was Heidi’s first day in the park. 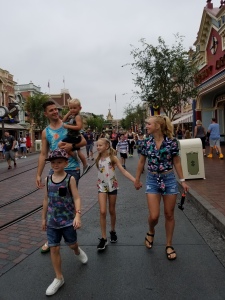 Mistake #1: Get to the park early before opening

For whatever reason, we were slow getting out of the hotel this day. I don’t know why. All I know is that getting through security before getting to the front gates took us twenty minutes. IF you decide not to follow this rule (you little rebel, you) note that there are two lines. The middle is for those with zero baggage. No purses, no backpacks, no strollers. We recommend that you send a couple adults with the kids through this line up since you can blitz right through, and get them to go to the bathroom. It’s one less line-up they need to stand in. It took about 20 min for us to get through the security line up. Now, if you get to the park early, the line is significantly shorter.

Mistake #2: Have a game plan

Why. Just why. We’d been excitedly talking about our trip, and we knew we were spending the day together… but we never actually talked about what that day was going to look like. What we ended up doing was starting in Disneyland, crossing over to DCA after lunch time, crossing back to DL for after dinner, and finally racing back across to DCA to watch the light parade. Don’t get me wrong, it was a great day. We did our traditional first ride (Pirates), got on some of the “kiddie” rides that my niece and nephew probably wouldn’t do on their other days, and FastPassed a couple big rides that we wouldn’t have gotten on otherwise. Because we didn’t really have a plan, we missed out on FastPassing all of the big rides at DCA; however, we did manage to FastPass Incredicoaster and Grizzly River Run, and even got on some of the minor rides. If you don’t have the MaxPass (more on passes here), then you have to physically go to the ride to get a FastPass. We were in DCA in the afternoon, so Soarin’ Around the World, Radiator Springs Racers, and Guardians of the Galaxy no longer had FastPasses available by the time we passed by those rides. However, we did a solid chunk of both parks, which isn’t too shabby at all. 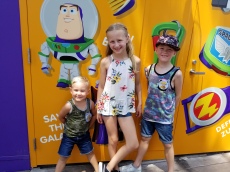 While we made mistakes, and maybe didn’t optimize our time as much as we could have, it was still a fabulous trip to Disneyland. Our one year old loved “it’s a small world” and The Little Mermaid. Our three year old loved Pirates of the Caribbean and The Little Mermaid. We took more video (but still not enough, sadly) than we had before, and we’ve enjoyed watching it as family since getting home. My phone was always dead by the end of the day, so I wish I had packed one of the three portable chargers sitting in my drawer at home.

I hope you’ve now learned from my mistakes, and hopefully from our successes too.

Have a magical day!
Elisia

One thought on “Surprise Disneyland Trip with Toddlers, July 2018”